Love, Liberty, & Caution: Why Jesus Would Wear A Mask 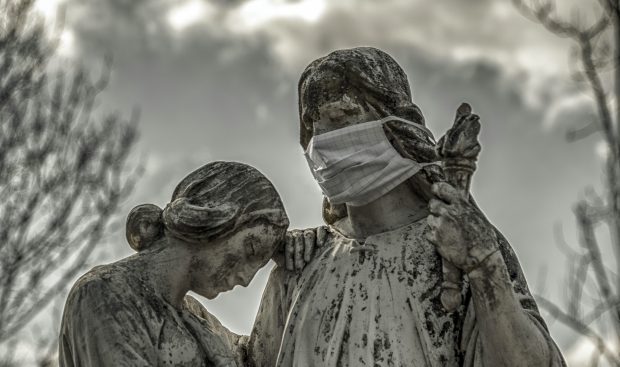 What’s most surprising right now is not the anti-science views circulating around the internet, but the callousness. There’s lots of debate, but less concern for the sick and the susceptible. All who fight for the “freedom” to not wear a mask overlook that the reason to wear a mask is for another person’s good, not their own.

Good citizens, and especially people of faith, should always prioritize love over liberty — even if that means personal inconvenience for a short period of time. All of us should be limiting personal travel, fashion, and preferences for the sake of others.  But if you doubt the WHO, doctors, government, or anyone else, show compassion out of caution, if for no other reason. (Note: Some cannot stay home for a variety of reasons, so “inconvenience” does not apply to those cases.)

If general caution isn’t enough, consider Christ — who surrendered some of his liberty, at least temporarily while nailed to a cross, for the safety of the masses. At the very least, even if you doubt scientists, ask yourself, “What would Jesus do if evidence or data were limited?” Would he insist on his legal rights, possibly endangering others in a reckless manner? Or would he be cautious, for a temporary period, until more was known?  In short, was Jesus more concerned with love for others or his own personal liberty?

If I know anything about Jesus and how he’d act during this pandemic, it’s this: If Jesus would die on a cross for you, he would also wear a mask for you.  He would do everything within his power to protect your well-being — not merely healing the sick, butÂ protecting from future harm (“go in peace,” Lu. 14:48).

Remember how we used to mourn over 10-20 people injured in an accident or killed in terrorist event? Now, many Americans want to move on — even though over 50,000 have died, greater than the entire death toll of Vietnam. As Americans, maybe the tragedy here is not our lack of intellect, but our lack of heart. If we cannot sense the world like Jesus does, then we cannot possibly care for those who need us most — namely, the weak, the sorrowful, the homeless, the outcast, and the poor.

Most of us, including myself, need to lament and feel more. Rejuvenating an economy before resuscitating our hearts will do more harm than good. And without sorrow, we are bound to become worse people than we were before this tragedy.

May God help us all.

Why Update Hymn Arrangements?
Preparing for Revival
Love in Victory & Defeat
Back