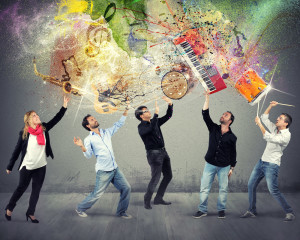 In his epistles, Paul speaks of psalms, hymns, and spiritual songs (Eph. 5:19; Col. 3:16). His list categorizes three musical types: (1) psalms, which are inspired songs of the covenant, (2) hymns, which are ecclesiastically-shaped doctrinal songs, and (3) spiritual songs, which are distinguished from both. In this context, then, what is meant by “spiritual songs?”  To put that question another way, psalms and hymns are also spiritual, so what sets this third category apart from the others?

In the New Testament, there appears to be a parallel between the “new song” mentioned by John and spiritual songs mentioned by Paul. These are not totally separate from one another.  The “new song” of glory is inspired not by human ingenuity, but by the Spirit of God.  Likewise, spiritual songs of the Church are not ancient artifacts, but fresh songs that embrace the present and envision the future.  In other words, the Spirit inspires both John’s “song” and Paul’s “song.” (It’s not surprising that John would use “new” rather than “spiritual,” considering his theological emphasis upon renewal, as evident by 9 references to “new” in Revelation.)

The Old Testament includes 7 references to “new song.” In every case, new songs celebrate God’s renewing work.  From “He put a new song in my mouth” (Ps. 40:3) to “sing to the Lord a new song… all the earth” (Ps. 96:1), these songs express a forward-looking, eschatological dimension.  That is to say, new songs reveal an inner longing for renewal that will ultimately come at the end of time. Isaiah’s mention of “new song” makes this especially clear as he calls all of creation to praise (Is. 42:10).

Likewise, the Spirit inspires songs that look ahead to the future.  In Scripture, the Spirit points to the eschatological fulfillment of God’s promises.  The Prophet Joel depicts the Spirit as marking the end times (e.g., Joel 2), and Paul also describes the Spirit as the seal of the covenant.  (For more information, see Gordon Fee’s God’s Empowering Presence, chapter 12.)  Thus, “Spirit-inspired” songs do not merely celebrate God’s past work, but possess an eschatological dimension as well.

Why does this matter?  To begin with, “spiritual songs” should not be limited to a musical style — such as a gospel tune or an ad-libbed chorus.  They are  expressive songs, bubbling up from within us, and we must not lose sight of their theological function.  Spiritual songs reflect the Spirit’s work within us, as we are being sanctified — moving closer and closer to glory.  As such, the Holy Spirit inspires us in increasing measure to sing new songs to the Lord. 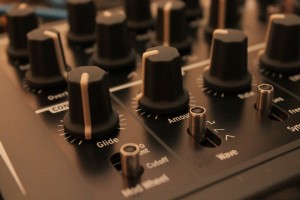 In response to Bob Kauflin’s recent post about synthesizers in worship, I agree with much of what he says (nearly everything), including the call for silence, variety, and Spirit dependence. Those are crucially important points, and I couldn’t agree more.

In my perspective, some further nuancing might be helpful in the article. Of course, the Spirit can work through physical means — just as He can work through other means. After all, we are embodied beings and certain sound waves affect us in different ways.

Too much cowbell would make us laugh. There’s nothing inherently spiritual or anti-spiritual about a cowbell, but culturally, we’ve associated cowbell with humor (e.g., SNL). Likewise, loud kick drum tends to be associated with dancing (or for others, headaches). These associations in themselves are not wrong.

As far as ambient pads go, in much of Western culture, that particular sound has been associated with contemplation, peace, and spirit. Like the sounds mentioned above, there is nothing moral or amoral about that in itself. In fact, synth sounds are used in contexts outside of worship (such as commercials) to communicate these same ideas.

For that reason, rather than comparing ambient pads to manipulation, I would compare it to the use of language. If culture uses certain metaphors (whether linguistic or not), then those metaphors can serve as vehicles of communication.

Again, I think Bob is awesome (a role model and a favorite!), and I agree with so much in his post. In my view, however, a bit more nuancing would be helpful, particularly some of the positive uses and/or more emphasis upon the fact that the Spirit not only uses spiritual means, but natural means. The Spirit’s activity is above and beyond our physical processes, of course, but neither is He absent from those processes.