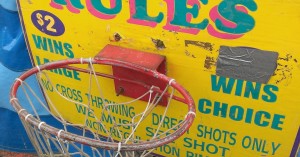 The “Rightness” of Sports

Play the game right.  We all agree on that.

But what does it mean to play the “right” way anyways?

We face a dilemma when a player is expected to win — and then that same player departs to a better team to win.  Most recently, people across the country felt outrage when Kevin Durant left Oklahoma City for Golden State, a move that inspired feelings of anger, distrust, and envy.  But why?

And then we cheer for losers and underdogs. Whether an elderly Kobe, a cheap Dirk, a non-jumping Duncan, or a booed Porziņģis — we want athletes not to take shortcuts, but to win the right way.  We prefer the “good” storyline rather than the bad one, and we turn on players who sign for money or who team up with other superstars.

As crazy as it sounds, we recognize that faithfulness counts in sports — maybe even as much as winning does.  If we’re honest, we know that our team might not win in the end, so at the very least, we want players to stick together and to stay with us.  We want players to be as faithful to us as we are to them.  For after all, the average fan would rather lose with loveables than win with thugs.

Whatever side we take, Durant’s choices demonstrate that ethical obligations do not exclude sports.  Old-fashioned ideals such as faithfulness, trustworthiness, and kindness apply to professional athletes, just as to everyone else.  At the end of the day, fans want athletes to represent them not only in terms of geography, but in terms of character.

In the eyes of loyal fans, Kevin Durant broke a promise. And that is what fans despise the most.  Win or lose, no one wants to be betrayed, and no one wants to be left behind.  That’s not to say that Durant did in fact break a promise; after all, he fulfilled his contract, and he has the legal right to move on.  But to many basketball fans, what matters is that it felt like a broken promise.

End results only matter for so much. Veteran fans know that championships are few and far between.  As decades pass, we learn that “doing things right” involves more than winning.  When we look to the courts and fields, we hope our athletes represent our ideals, not merely add numbers to a scoreboard.  As fans, we can still cheer after losses, as long as we believe in the character of our athletes.

More than anything else, sports of an insight into passion, drive, and character.  No matter how bad a team may be, we are drawn to cheer for athletes who battle despite the odds — for those who fight on behalf of the people who love them.  And that is how you do things right.

Hark, the voice of Jesus calling,
“Who will go and work today?
Fields are white and harvests waiting,
Who will bear the sheaves away?”
Loud and long the master calls you;
Rich reward he offers free.
Who will answer, gladly saying,
“Here am I. Send me, send me”?

If you cannot speak like angels,
If you cannot preach like Paul,
You can tell the love of Jesus;
You can say he died for all.
If you cannot rouse the wicked
With the judgment’s dread alarms,
You can lead the little children
To the Savior’s waiting arms.

If you cannot be a watchman,
Standing high on Zion’s wall,
Pointing out the path to heaven,
Offering life and peace to all,
With your prayers and with your bounties
You can do what God demands;
You can be life faithful Aaron,
Holding up the prophet’s hands.

Let none hear you idly saying,
“There is nothing I can do,”
While the multitudes are dying
And the master calls for you.
Take the task he gives you gladly;
Let his work your pleasure be.
Answer quickly when he calls you,
“Here am I. Send me, send me!”

What is a Hymn?

A friend recently asked me to explain what a hymn is, and it is a great question. Here are a few observations. Feel free to comment and add any of your own.

1. A hymn is not determined by when it was written. The date is irrelevant. Many hymns are being written today — usually more modern in style and easier to sing.

2. Hymns often consist of a progression of lyrics, thus the need for multiple verses. (e.g., progressing from the incarnation to the consummation)

3. Hymns are generally more eloquent and theological, and for that reason, they appeal to the cognitive part of us. Hymns inspire by reminding believers of specific doctrinal truths.

4. Hymns are usually laden with complex truths, which makes them suitable to pair with praise choruses that are often simpler and more emotive. We need to worship in both spirit and truth.

5. Hymns often repeat words, especially during a refrain — a trait that they share in common with praise choruses.

6. Hymns are not inerrant. Some are well-written and worth singing, while others are not. Some wonderful hymns have been treasured by the church and passed down for centuries.

7. Hymns acquire deeper meaning over time as Christians sing them in church, at weddings, at funerals, decade after decade. As a Christian sings them over the years, the truth expressed in the lyrics becomes more precious.

8. Older hymns often have a difficult melody line to sing and can be out of the vocal range of many people. The notes and style are not sacred, however, so musicians should feel free to adjust the melody and arrangement for the sake of the congregation.

Before God created music, He created the heavens and earth. Think about it for a moment. There are many styles of music, but we all share the oceans, the stars, the sun and moon. All over the world, we look at the same handiwork of God. Incredible!

Psalm 19:1-2 tells us that the skies display the glory of God. David says that the world around us declares, proclaims, speaks, and displays truth about God. In other words, God’s creation speaks to all cultures, to every part of the globe — regardless of language or dialect. Everyone can see God’s glory because He left no one out.

To inspire global worship in our churches, it is helpful to include images of creation in worship gatherings. Since most congregants spend a large part of their week indoors, Sunday is a great opportunity to remind them that the world is bigger than the sanctuary. In doing so, make sure that artwork and photography represents a wide scope of locations, not just scenes of North America.

God is committed to global worship, and we should try to reflect this in our worship gatherings.

If you need a Christmas gift that’s a bargain and immediate, remember that individual MP3’s are available at DiscRevolt: http://www.discrevolt.com/albums/view/2334

It’s really easy to download the songs. You can even email the MP3’s to your friends online. It’s a perfect way to keep in touch this holiday season!

Very rarely do I post links to other websites, but this one is so beneficial, I couldn’t resist.

If you are interested in worship or lead worship at your church, Sovereign Grace has graciously posted 37 audio sessions on their website at:
http://www.sovereigngraceministries.org/Events/WorshipConference.aspx

Worship conferences usually cost several hundred dollars, so this is a blessing for those of us without such resources. Although I did not attend the conference, these audio sessions are the next best thing.

Over the past two weeks, I wrote and recorded two new songs — “Tonight” and “Brand New.”

Be sure to check them out. Both are available for $1 at DiscRevolt.com.

After several late-night recording sessions, “He Heard My Voice” was just added to my latest worship EP.  You can check out a demo of the song and download it here:

On the other hand, maybe even “uncovering” is giving ourselves too much credit. My reason for second guessing myself is this A.W. Tozer quote from “Theology Set to Music”:

Hymns do not create truth, nor even reveal it; they celebrate it. They are the response of the trusting heart to a truth revealed or a fact accomplished. God does it and man sings it. God speaks and a hymn is the musical echo of His voice.

Tozer had a humble view of worship songs. They need to be seen for what they are. Songwriters and songs do not create truth. As Tozer states, “God does it and man sings it.” We are responding to the truth that God has created.

The question that remains is this: Do new arrangements of words reveal truth? Can our minds be edified in a new way through new songs and new lyrics?

On one hand, I want to say yes.  Our minds need words and arrangements of words to help us comprehend ideas.  As human beings, our thoughts are directly connected to our vocabulary.  Conversely, if we are limited in our exposure to language, we are limited cognitively.

However, I think Tozer is emphasizing something deeper here. While words are crucial to our understanding of truth, God can always transcend language. After all, He is the God of burning bushes, talking donkeys, and babbling tongues. Ultimately, then, Tozer offers a helpful reminder that it is the Holy Spirit who reveals truth to us, not our human creativity.

For this reason, worship songs are responsive. Our task as songwriters is not to create a new message, so that others can “better understand.” Rather, we have the joy of helping others celebrate the truth that already exists.  Our worship should be a musical echo of God’s voice.

God has already done it. Now it’s our job to sing it!

My new worship EP is now available for purchase online.  You can download tracks, or the entire EP of A Thousand Names, at DiscRevolt.com.  Just click HERE to find the Joel Jupp page!